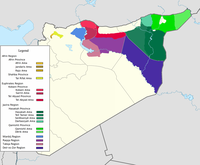 The Regions of North and East Syria since September 2018.

The political system of the region is based on its adopted constitution, officially titled “Charter of the Social Contract”.[29][124] The constitution was ratified on 9 January 2014; it provides that all residents of the region shall enjoy fundamental rights such as gender equality and freedom of religion.[29] It also provides for property rights.[125] The region’s system of community government has direct democratic aspirations.[126]

“For a former diplomat like me, I found it confusing: I kept looking for a hierarchy, the singular leader, or signs of a government line, when, in fact, there was none; there were just groups. There was none of that stifling obedience to the party, or the obsequious deference to the “big man”—a form of government all too evident just across the borders, in Turkey to the north, and the Kurdish regional government of Iraq to the south. The confident assertiveness of young people was striking.

However, a 2016 paper from Chatham House[36] stated that power is heavily centralized in the hands of the Democratic Union Party (PYD). Abdullah Öcalan, a Kurdistan Workers’ Party (PKK) leader imprisoned in İmralı, Turkey, has become an iconic figure in the region whose libertarian socialist ideology has shaped the region’s society and politics through the ruling TEV-DEM coalition, a political alliance including the PYD and a number of smaller parties. Before TEV-DEM, the region was governed by the Kurdish Supreme Committee, a coalition of the PYD and the Kurdish National Council (KNC), which was dissolved by the PYD in 2013.[127][128][29][129] Besides the parties represented in TEV-DEM and the KNC, several other political groups operate in northern Syria. Several of these, such as the Kurdish National Alliance in Syria,[130][131] the Democratic Conservative Party,[132] the Assyrian Democratic Party,[133] and others actively participate in governing the region.

The politics of the region has been described as having “libertarian transnational aspirations” influenced by the PKK’s shift toward anarchism, but also includes various “tribal, ethno-sectarian, capitalist and patriarchal structures.”[125] The region has a “co-governance” policy in which each position at each level of government in the region includes a “female equivalent of equal authority” to a male.[134] Similarly, there are aspirations for equal political representation of all ethno-religious components – Arabs, Kurds and Assyrians being the most sizeable ones. This has been compared this to the Lebanese confessionalist system, which is based on that country’s major religions.[125][135][136][137][136]

The PYD-led rule has triggered protests in various areas since they first captured territory. In 2019, residents of tens of villages in the eastern Deir ez-Zor Governorate demonstrated for two weeks, regarding the new regional leadership as Kurdish-dominated and non-inclusive, citing arrests of suspected ISIL members, looting of oil, lack of infrastructure as well as forced conscription into the SDF as reasons. The protests resulted in deaths and injuries.[138] It has been stated that the new political structures created in the region have been based on top-down structures, which have placed obstacles for the return of refugees, created dissent as well as a lack of trust between the SDF and the local population.[139]

Qamishli initially served as the de facto capital of the administration,[7][101] but the area’s governing body later relocated to Ayn Issa.[1]